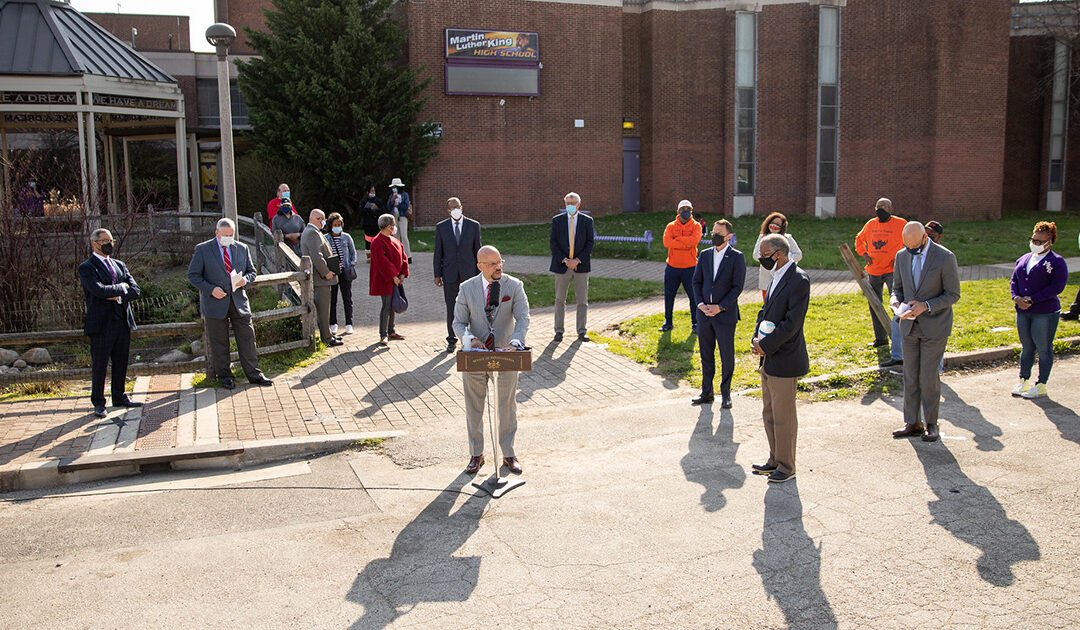 Sen. Hughes was joined by several elected officials, education advocates, teachers and students to make the call for funding equity Monday afternoon at Martin Luther King High School. The governor’s proposal calls for a critical state investment to provide more equitable funding for our public schools. The proposal fully funds the state’s fair funding formula and infuses additional dollars into the process so that no schools are harmed by moving to a fully funded formula.

“Education in Pennsylvania is funded separately and unequally,” Sen. Hughes said. “There are two separate school systems in Pennsylvania and we must change that. I have seen the effects of these funding inequalities all across the commonwealth and I know that we cannot wait any longer to address the injustice in our education system. Pennsylvania’s general assembly has an opportunity to ensure children have the resources they need to learn and grow in well-funded public schools. Our present and future depend on how we handle this moment. We must not fail to finally deliver on our responsibility to provide a through and efficient system of public education that serves the needs of the commonwealth.”

Pennsylvania has one of the worst education funding gaps in the nation, with some studies estimating the commonwealth underfunds its schools by approximately $4 billion. Advocates who have been fighting to address the funding gap view Gov. Wolf’s commitment and needs in communities across rural and urban communities alike as reasons to act now and fix the longstanding problem.

“The system for funding schools in Pennsylvania is unfair to our students and community, and it’s time for change,” Gov. Wolf said. “The state still largely funds schools based on student enrollment from 30 years ago, which underfunds growing districts from our small towns to our big cities. My commonsense plan puts all existing basic education funding, $6.2 billion, plus a $200 million increase this year, through the fair funding formula. Plus, an additional $1.15 billion will ensure that no school loses a single dollar in state resources from using the formula. We must restore fairness to school funding so every community can provide the quality education that students need to succeed in life.”

“Our public schools have been underfunded for decades — and the greatest barrier for many families is access to education,” said Philadelphia Mayor Jim Kenney. “The governor’s proposal would be an historic investment in education. It will put working class and low-income families first, and make our system more fair for those who need help most.”

The fair funding formula was agreed to by a bipartisan committee in 2014 following more than a dozen hearings across Pennsylvania. The formula directs money to school districts based on factors such as the number of students enrolled and the poverty level of those students and formula also takes into account factors that reflect student and community differences such as the population density, the household income of families in the district, the number of students attending charter schools and the district’s ability to raise money through local taxes.

“While the relief funding has allowed us to support our budget over the next three years while making investments in our students and our school buildings, we know that uncertainty still exists,” said William R. Hite, Jr., Ed.D., superintendent of the School District of Philadelphia. “Recurring investments, such as the education spending budget proposed by Governor Wolf, will help us avoid hitting a structural cliff while continuing to make the investments that our students, staff and school buildings deserve.”

Sen. Hughes has highlighted the visible differences between two high schools that are four miles apart, documenting how critical the fair funding formula is critical in ensuring students can succeed in school, regardless of where they live. A lawsuit aimed addressing the fair funding gaps Pennsylvania schools is set to go to trial Sept. 9, 2021, which attorneys bringing the lawsuit discussed at Monday’s press event for education justice.

“In order to provide high-quality education to all K-12 students across the Commonwealth, there is nothing more important than investing in our public schools,” said Sen. Art Haywood (D-Montgomery/Philadelphia). Governor Wolf’s fair funding proposal promotes equity, fairness, and excellence. Fully funding this formula will ensure that children from all racial and ethnic backgrounds in Pennsylvania will have a fair shot at becoming successful leaders of tomorrow. By putting our youth first, we can fix the opportunity pipeline, prevent youth from falling through the cracks, and set youth on the pathway to opportunity, which includes staying in school, then pursuing trade school, higher education, or a career.”

Sen. Hughes is focusing education justice this year as his way to honor MLK’s legacy and his tragic April 4, 1968 assassination. The senator has previously led events on economic justice as a part of events honoring the civil rights icon and American hero.

Video of the event is available here for viewing. A download link can be provided upon request.