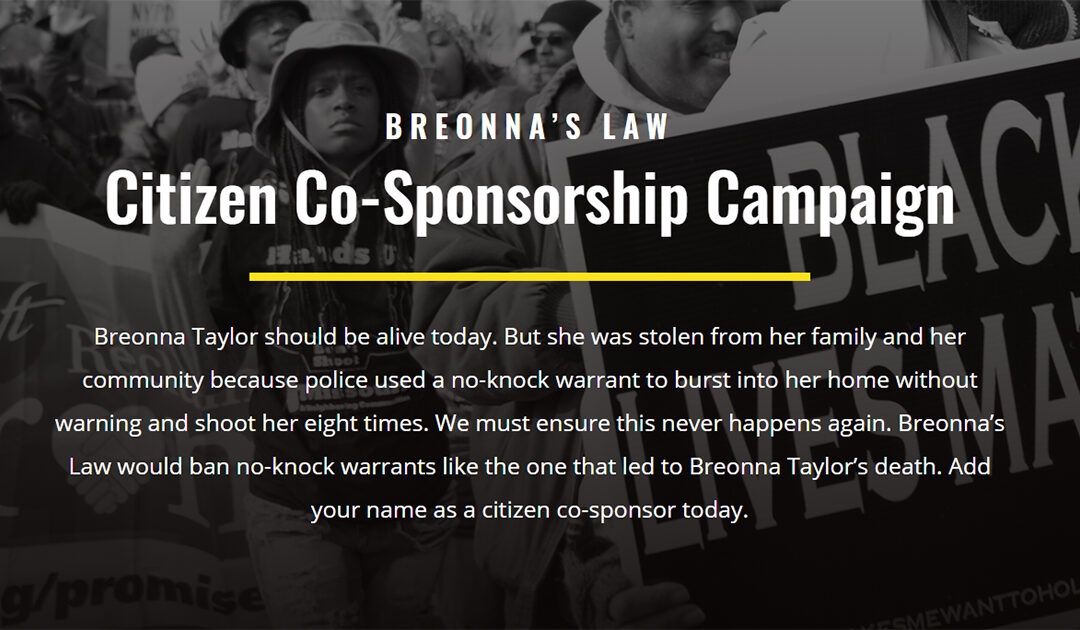 The bill is named after Breonna Taylor, a 26-year-old African American woman who was fatally shot eight times by police on March 13 after three plainclothes officers used a no-knock warrant to enter her apartment in Louisville, Kentucky.

“Breonna Taylor should be alive today. But police used a no-knock warrant to burst into her home unannounced and shoot her eight times in the middle of the night,” said Kearney. “My bill would ban no-knock warrants like the one that led to Breonna’s death. No-knock warrants pose a deadly risk to innocent lives, especially Black lives. We must ensure this never happens again.”

Kearney’s bill would require law enforcement officers to knock and announce themselves when serving a warrant, waiting at least 15 seconds for a response. It requires officers to wear body cameras during a search, as well as five minutes before and after the operation. Officers would also have to wear clothing that clearly identifies themselves as law enforcement. No-knock warrants have been banned in Oregon and Florida, and a federal ban has been proposed by U.S. Senator Rand Paul (R-KY).

Kearney has launched a Citizen Co-Sponsorship Campaign, where residents of Pennsylvania can add their name to support Breonna’s Law. Those who want to become a citizen co-sponsor can go to: www.senatorkearney.com/breonnaslaw

An estimated 20,000 no-knock raids take place every year across America. Most of these raids are related to drug possession but often find no drugs. The New York Times found at least 31 civilians and 8 law enforcement officers died in no-knock raids from 2010 to 2016. In addition to Breonna Taylor, no-knock raids have resulted in cases like the fatal shooting of 7-year-old Aiyana Stanley-Jones in 2010 and a grenade being thrown into the crib of 19-month-old Bounkham Phonesavanh in 2014.

Search warrant raids have been shown to disproportionately impact Black Americans. According to a 2014 ACLU study of over 800 SWAT team deployments, Black people were the target of 42% of search warrant raids despite being only 13% of the U.S. population. In Allentown, Pennsylvania, Black people were nearly 24 times more likely than white people to be impacted by these raids.