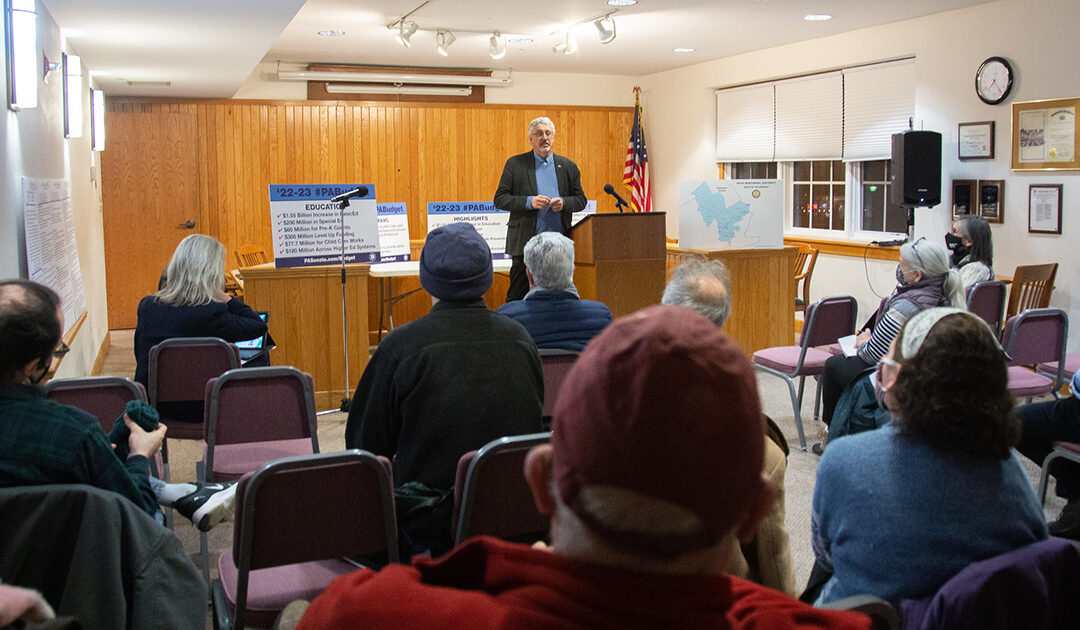 Speaking to a room full of constituents, Kearney opened the meeting by giving updates on Harrisburg-related issues, including highlights of Gov. Wolf’s recent budget address.

“As the new Vice Chair of Senate Appropriations and member of the Education Committee, I’m particularly happy to see the Governor’s proposed increase in funding for education,” stated Kearney. “There are also some long-overdue increases in Health and Human Services, reduction in corporate net income tax, and investments in workforce development and local public health infrastructure. There is also a proposal to raise the minimum wage to $12 by July of this year, with annual increases until we reach $15.”

“The Gov.’s proposal for increased investments in education is critical,” Kearney said to the crowd. “As an architect, I believe so are adequate facilities to learn.”

Kearney also discussed Senate Bill 845 – legislation he sponsored – unanimously passing out of the Senate Judiciary Committee on Feb. 9. This bill would amend the definition of drug paraphernalia contained in the Controlled Substance, Drug, Device, and Cosmetic Act to specifically exclude fentanyl test strips utilized for personal use.

“I introduced a bill to legalize Fentanyl Test Strips because there is an exponential growth of people dying because of overdose deaths in the Commonwealth due to drugs being laced with fentanyl,” said Kearney. “Thanks to bipartisan support, the bill is on its way to becoming law.”

The senator also gave attendees information on the redistricting process, specifically focusing on changes impacting his district (26th District). Earlier this month, the Legislative Reapportionment Commission (LRC) approved the final maps for the House and Senate, aligning Easttown, Willistown, and Tinicum Township with other Senate districts and adding Lansdowne to the 26th District.

To round out the evening, Kearney spent the last 25 minutes fielding questions from constituents which included concerns about masks mandates, leadership changes for Crozer Health Systems, questions about the status of the legalization of marijuana, and a development project that would bring condominiums to Swarthmore Borough.

Residents who were unable to attend the meeting can watch the recording by clicking here or watch below:

Several additional town halls are scheduled to take place in the upcoming months.  To find more details about the next series of meetings and other event information, visit www.senatorkearney.com/events/.